Arunachal Pradesh Land Settlement and Records Amendment Bill, 2018 was passed by voice vote in the assembly to ensure ownership rights to indigenous tribal people, including communities and clans having land possession certificates (LPCs) in the state.

State lands were regulated by customary laws and people were deprived of any document to claim ownership, though the state graduated to parliamentary democracy in 1975. Thus, they were unable to either mortgage their lands to seek loans from a bank or able to land on a long-term lease to any investor or claim compensation if taken by the government.

The historic bill recognizes ownership rights of indigenous people to give land on long-term lease up to 33 years, extendable to another 33 years for small and big ventures. This revolutionary act could facilitate investment flow by boosting the local economy.

You can see the official press release by the state government on Arunachal Pradesh Land Settlement and Records given below: 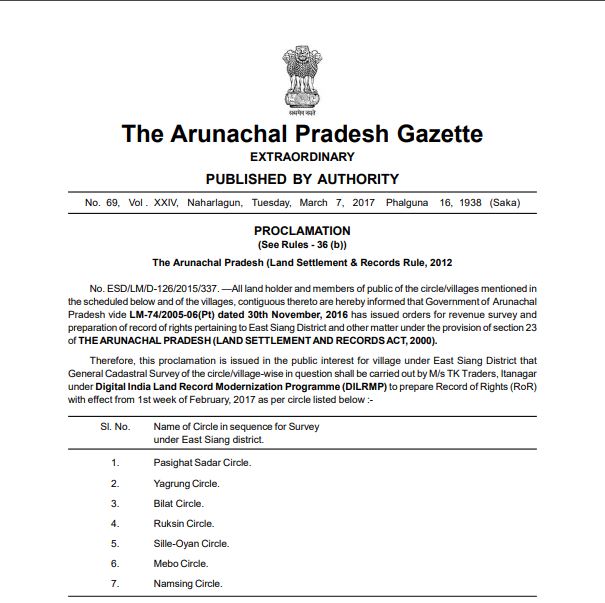 In the Arunachal Pradesh Land Settlement and Records Act, 2000 (Act No. 10 of 2000), (hereinafter referred to as the Principal Act), in section 88, after sub-section (1), the following Sub-Section shall be inserted,-

“(1A) Every person, who holds valid land possession document issued by the competent authority, outside notified forest shall be entitled to be conferred ownership rights on such terms and conditions, as may be prescribed”.

How to get your Arunachal Pradesh Land Settlement and Records Document (Online)?

To get land record documents through the official website you just need to follow the easy steps given below:

All the Land related documents are issued from the DC Office of state. any applicant may submit a correctly filled application form along with all supporting documents as required. The address is given below:

We hope that in this article, we have provided you complete information on Arunachal Pradesh Land Settlement and Records. For further assistance, you have to consult in the Tehsildar office and for any technical query contact information is given below: